You visit the Google Play Store with high hopes of finding a good, non-premium game. But then tragedy strikes. The downloaded game turns out to be a freemium title. Well, you are not the only one fooled by this in-app finagling. There are millions of users who do not read the fine print - yes the dreaded “offers in-app purchases” (IAP) label below the Install button - and download the game.

Nowadays, most games adopt this model and people are aware of it. They may even shell out a few bucks to complete a level or two. This list is not for them. It’s for those who are looking for Android games without in-app purchases. The good news is that there are games that won’t charge a dime for gems, weapons, timers and boosts. 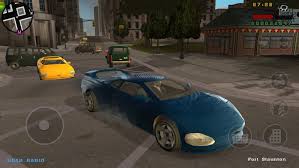 The bad news: There are very few non-IAP games out there, and so it would be very difficult for you to search for those games at the Play Store. No worries. I have done the hard work for you best android games purchase . Below are some of the best games for your mobile platform:

Dumb ways to Die lets you rescue a plethora of quirky characters from death. There are over 10 “death” scenarios. Each scenario puts a character in a precarious situation that could lead to death if he’s not rescued on time. You will need to follow a few simple steps to rescue your favorite dumb character before time runs out. Most scenarios portray a grim situation in a rather hilarious way.

The mini-games test your reflexes and are not too challenging. You may need to swat wasps with your fingers before they bite a character to death or flick the piranhas to get them off a character’s private parts. The rescued characters will be placed on your train station as collectibles. The game also has a few unlockables, including the famous Dumb Ways to Die video. The first game of the series is available at the Google Play Store.

Astrosurf is a physics-based game where you will need to navigate your spaceship safely through a white canvas by avoiding small, medium and large planets. The game’s gravity simulation will make navigation difficult. You will have to dodge planets and be quick to move away from them before your aircraft crashes into them. The game tests your reflexes and becomes increasingly difficult as you keep avoiding more and more planets.

The game has superb visuals. Like Doodle Jump, Astrosurf’s graphics are pulled straight out of an art book. You will love controlling a 3D aircraft model on a white canvas with hand-drawn planets and other objects drawn on it. Playing Astrosurf is a good way to kill time.

Slambots is an addictive arena-based vertical platformer with old school retro-inspired visuals. You may find gameplay a bit complicated at first and may take time to get accustomed to controls. Once you know how the game works, it will be hard to put down this game. The goal is simple: bounce off rival bots to eliminate them. You lose a level, if enemy bots bounce on top of you or hit you from the side.

You will need to tilt your Android device to move around the screen and bounce on enemy heads. You earn score combos each time you achieve a string of bounce kills without touching a platform. You will also earn bonus points if you activate “Slam” by touching the screen at the right moment soon after your Slambot comes down after bouncing off an enemy. The game is all about earning points and the player who scores the highest tops the online leaderboard.

Gameplay isn’t easy because enemies move in unpredictable ways, making it quite difficult to bounce on them. The challenge lies in being quick to detect enemy movement patterns and move accordingly. The game’s challenging and extremely addictive.

Ready Steady Bang brings out the cowboy in you by pitting you against 10 badass outlaws in a quaint Mexican town. It’s a fun dueling game that tests your reflexes. You will need to press the “bang” button to fire before your opponent does and this should be done as fast as possible to avoid getting hit first. Each level has multiple rounds. A player who’s quicker than his opponent in most of the rounds wins a level and unlocks goodies.

Being quicker than your rival has its own perks. You get to unlock funny cowboy death animations. You will also be able to see how quick you were via the stats menu. You, however, won’t be able to see how fast your AI opponent was in case you lose a duel.

The visuals are good and the hilarious animated death scenes unlocked at each level are a good reason to play all rounds. And if you are bored playing against an AI opponent, there’s always a 2-player mode to show who’s a quick draw cowboy.

What is an IAP?
An IAP (In-app purchase) is an in-game functionality that lets the player buy virtual goods by spending real money. These virtual goods can be anything from power-ups, energy refills to boosters and even unlockable content, such as new characters, maps and bonus levels. Most games may or may not force you to spend money to buy certain items.

Guns isn’t your average shooter. It’s a realistic simulator that tests your shooting skills by using a virtual target. You will have access to a variety of guns, such as assault rifles, sniper rifles, machine guns, shotguns, sub-machine guns, even knives and grenades to aid you in your target practice. Since this Android game does not offer in-app purchases, most virtual weapons can be used without spending money.

Guns doubles up as an augmented reality app, allowing you to turn a real-life animate or inanimate object as your target for shooting practice. Just aim, tap the screen or shake your device to fire.

While the game does pretty well in simulating real-life physics to give you a very realistic target practice, certain improvements can add more fun to the overall shooting experience. Improved graphics, sounds of trigger pulls and realistic recoil are some improvements most players are looking forward to in this game.

Chrono & Cash is a retro-inspired platformer with plenty of fun levels to keep you busy for hours. Your goal is to run, jump, avoid enemy contact and collect items scattered throughout the levels. Enemies will spawn randomly and will be quick to jump on you, so keep an eye on them. You will have less time to react and pick items, which is why speed and quick reflexes are crucial to pass a level.

The enemy spawn rate increases and their movement pattern becomes quite complex in advanced stages. Levels offer multiple challenges and completing them will give you bonus points. Challenges range from collecting diamonds to snagging items in the correct order.

Chrono & Cash is for those who love fixed-screen platformers like Super Crate Box. The 8-bit retro visuals are true to its design and style and will surely make 90s gamers nostalgic. The non-premium version is ad-supported, but there is no IAP.

Gunslugs is a side-scrolling shooter game inspired by Metal Slug. In this game, you venture out on a dangerous mission to save the world from the Black Duck Army invasion. Gameplay is standard run-and-gun affair, but random level generation will make things quite challenging for players. You will find a randomly-generated level each time your character dies.

Gunslugs lets you choose a character of your choice. You also get to unlock new characters as you progress through different stages. There are also plenty of new enemy types, traps and obstacles to make this fast-paced run and gun action game even more unpredictable and challenging.

Gunslugs is a hard nut to crack. The randomly-generated levels and complex enemies make play time quite frustrating and difficult. The game is for hardcore platformer lovers.

Jenga for Android brings back tower building to life with its perfect real-time 3D physics simulation. You will need to carefully remove blocks and place them on top of the tower, keeping in mind that the tower should not fall. Your touch needs to be quite delicate to take away a block and put it on top of a tower. A little tap here and a drag there might ensure that tower gets less wobbly and does not fall apart.

Those who have played Jenga know how difficult it is to remove blocks from a real wooden tower, and this game recreates the same level of tension and excitement on your Android device.

The real fun lies in playing with friends online. The game’s Pass ‘n’ Play mode lets four players get into a tower-building frenzy. There are two more gameplay modes besides the classic Jenga. If you love the original Parker Brothers version, you will love every part of the faithful adaptation of world’s most popular pastime.